Can't wait to meet some great people at the Hike It Baby Meet-and-Greet on May 6!  Beech Hill Farm, Hopkinton, NH at 11am!!

We started off with one of our hiker friends, John Myers.  It wasn't too cold or too warm when I got out of the car, and the snow was off the ground.  I knew there would probably be ice and snow further up the trail, but for now it was bare except for the thin strands of grass that perked up from the dirt.  After Mom took a picture of John, Sage, and I, I stood by the gate and turned to take an image of them.  The sun showed itself through the trees. 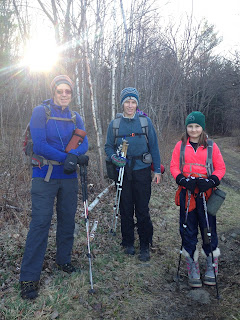 There were occasional leaves and the trees were still mostly bare, recovering from the winter. 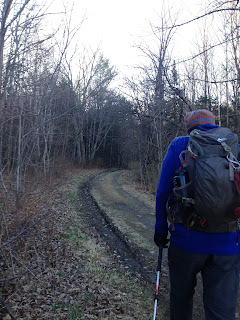 We shortly arrived at the intersection.  There was a pole in the picture!  I think the pole belonged to Mom.  She was using her pole to remind us where to go. 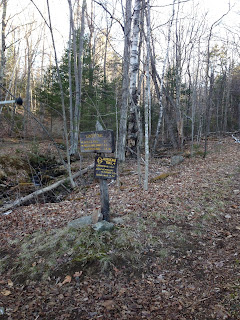 Talking on the trail.  The sun is slowly rising... 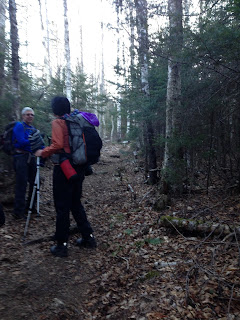 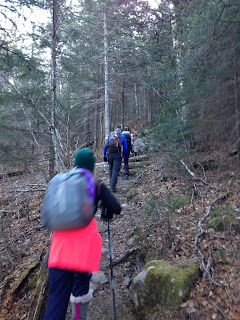 The trail no longer stayed bare.  The remains of a mostly timid winter showed themselves.  We tried our luck without traction, grabbing onto trees and walking on the rocks. 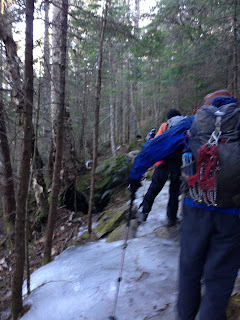 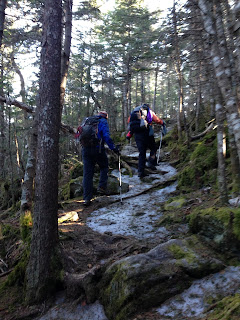 Got about half of Sage's face with this image! 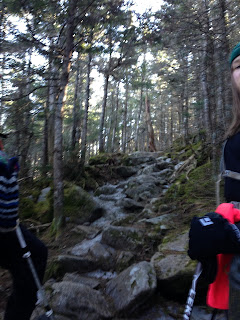 The snow became more plentiful and the ice started to go away.  There's Sage walking along... 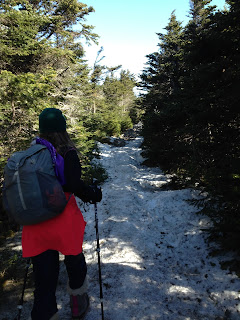 Here we are at the summit of Mt. Moosilauke!  It felt really cold up there, which was a contrast from the general temperature we all felt while hiking up the mountain below tree line.  It was also quite windy, which contributed to the icy feel of our faces.  None of us wanted to take our hands out of our gloves for longer than we had to.  We each got a very quick picture at the summit, and then we ran into the protection of the rocky remains of the ancient hotel on top of the mountain.  I didn't get other pictures of scenery because of the frigidness issue.  However, you can get a glimpse of beyond in the summit image below.  Beautiful blue mountains and rolling hills appeared all around Mt. Moosilauke. 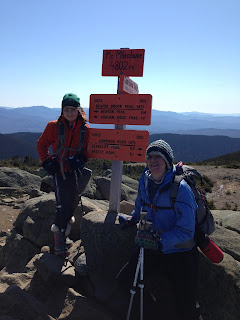 Rushing to take cover!  Here is John smiling for a summit picture--the sign, though you can't see it in this picture, is to the right of John. 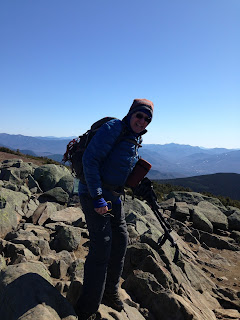 While we were resting on the summit, eating our precious chocolate and candy, we saw (and heard) a helicopter.  It had a red cross on it and it flew over the mountain.  Here are the pictures I managed to get... 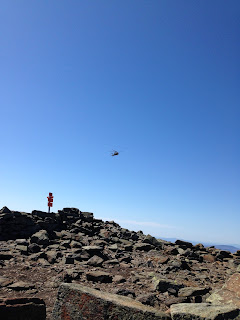 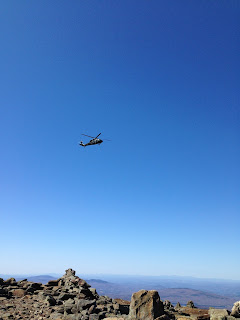 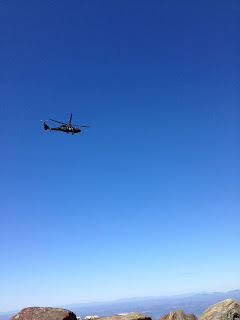 After we felt rested, we got up and continued back down the mountain.  We wisely decided to put on our balaclavas for the way down; the wind situation hadn't changed.  Before we descended, we met some nice people on the top.  There was a boy and a teenager and their father (I presume).  It was lovely to meet other kid hikers like ourselves!  They were wearing fewer layers than us, but they looked content and comfortable anyway.

On the way down, we met a friendly group of teenagers coming up the mountain.  We also decided to put on our Hillsounds.  We survived without traction on the way up, but we didn't feel like taking the risk on the way down!

The end of a great hike!  As usual.

Posted by Patricia Ellis Herr, Alexandra Herr, and Sage Herr at 9:32 AM