Before proceeding to my blog post of Mt. Waumbek, I would like to mention that UCS (Union of Concerned Scientists) has a great rebuttal to Scott Pruitt's claim that carbon dioxide (CO2) is not a primary contributor to global warming (and some other false claims he makes as well).  Scientists all over the world know carbon dioxide is a leading gas that contributes to climate change; this fact has been known for years and is absolutely not new.  Please donate to UCS!  Click here to donate if you support science and want climate change effects to be lessened.  Thank you!

**ALSO -- We are happy to be featured in a podcast of the Journey Seeker by Christopher Haseltine.  We did the interview in early fall of last year, and the podcast  was just released.  We enjoyed talking about our adventures; thank you for the wonderful experience, Mr. Haseltine!***


There was a strange snow barrier in the front of the parking lot.  Thankfully, we were able to drive to the side of it, and we were hoping that nobody would fill in that side before we got down from the mountain.  If they did, then we would have to dig ourselves out with our little sleds.  This would have been doable, but it would have taken some time.  The little wall could have been made by some kids from a nearby house, because it was not neat or even, and the sides were left clear for cars to pass through.

The day was very cold and dim when we started out; it was early in the morning, and the temperatures were frigid.  Sage and I had our fleece and jacket on as well as hat and gloves. 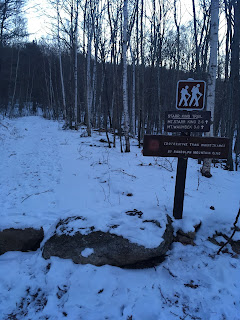 Mom hurt her shoulder a couple weeks ago, and she went to the hospital recently.  She was prescribed a certain type of steroid to take for a few days.  We were hiking fairly fast partly because all of us were freezing, but also because Mom happened to be in front and was taking the prescribed steroid which was making her muscles feel less tired than normal. 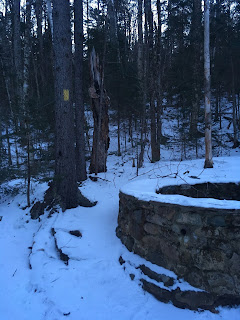 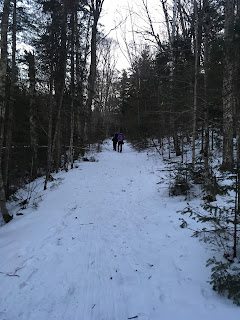 The reason we hiked something short today was so that Mom could give her shoulder a bit of a break. 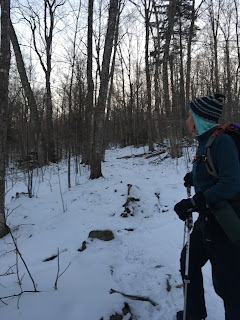 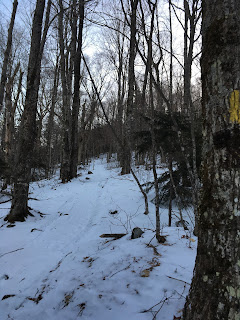 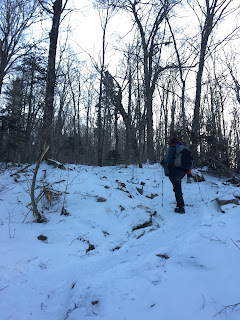 The trail was open and the light was rising through the trees. 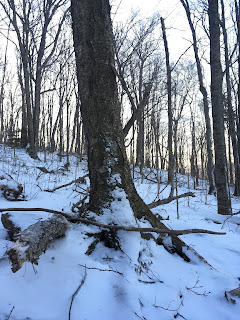 Mom fell at one point and was fine, but later we noticed some branches had cut her face a little...she started bleeding.  She said she didn't feel anything, though.  As we like to say, it is not a real hike without mud or blood; so now it's a real hike! 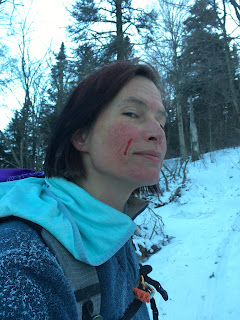 There is one part on Mt. Waumbek where cold air collects.  Before we headed into this cold spot, we prepared ourselves by putting on our gloves and getting ready to hike quicker. 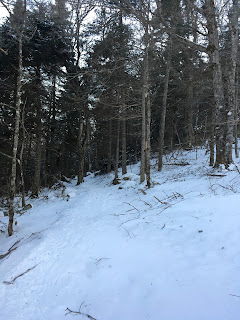 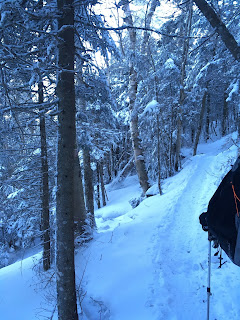 When we arrived at Starr King, I realized how lovely (but cold) the day was.  The sky was a deep blue with its usual gradient of light blue to dark, and we could see faraway mountains in the distance. 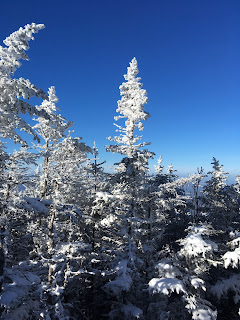 We could also see a lovely view of the Presidentials: 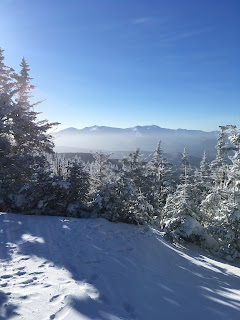 One part of my hair was completely white from being coated with a very thin layer of snow and frost.  The hair strands next to the white ones were just a little lighter than usual. 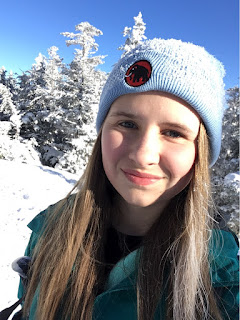 Sage on the chimney! 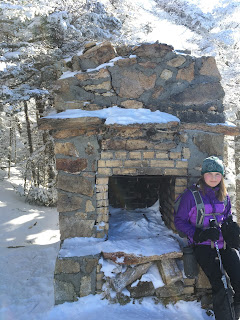 Starr King's summit was warmer than a lot of other places on Starr King Trail.  It felt relaxing to be able to sit down for a moment and get a drink before moving on without getting too cold. 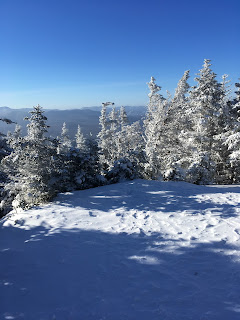 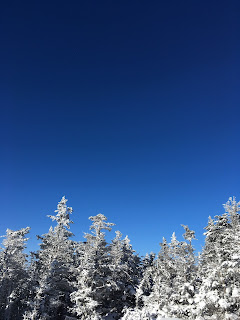 After hiking down and then up again, we arrived at the summit of Mt. Waumbek.  It was colder here than over on Starr King, but we could still rest for a few minutes.  There was a lovely view from the lookout point, which was kind of odd; we usually save Waumbek for bad weather days since it is in the trees, so we almost never see a beautiful view from the lookout point. 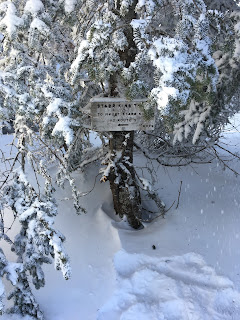 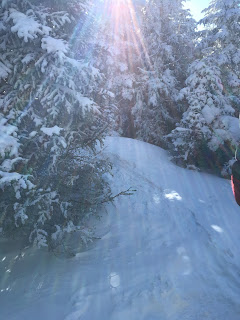 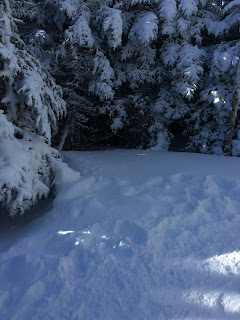 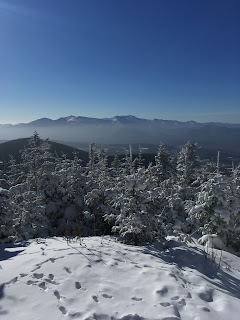 While going down, I started to think about a math test I was going to take when we got back home. 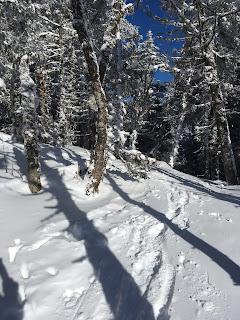 That was a fun hike!  It was refreshing to have pretty views as an added bonus.
Posted by Patricia Ellis Herr, Alexandra Herr, and Sage Herr at 10:25 AM